The kids of the world can teach us adults so much, if we only just stopped to take note of them. The issue of faith is something that, repeatedly, I am schooled on by my children. And I don't mean a pie-in-the-sky type of faith where we believe that somehow, somewhere what we hope for becomes our reality. I'm talking about real, specific, demanding faith.

Zac in particular has been one of very bold faith. He approaches God with the entitlement of a child who knows their Father is the Creator of the universe. From an early age, he would wow and shame me with his declarations, fearlessly insisting, despite the heavy clouds in the sky, that God would open the sky and bring sunshine because that day was his swimming day. Not much has changed.

At the start of the year, while watching the cricket, I realised that the children walking the Proteas out onto the field were from a local cricket club - and not just any local club; the children were from the local cricket club Zac was going to play for. Knowing this would be disappointing for him, we broke the news gently. Of course he was upset; he's seven, after all. But he surprised me with his upbeat response. "I know," he said, "but I'll get another chance." I didn't have the heart to explain to his bright mind just how slim that chance was, so I left it.

Then one day, less than four weeks later, I had a message on my desk to call my dad. I hate those messages, by the way. They never fully inform you about the context, and my default is to assume that something is wrong. Of course, I called back immediately.
"Can you get the school to allow Zac to leave early next Tuesday?," he asked
"Tuesday? Why? What's happening on Tuesday?," I asked, not entirely sure if I'd missed something important.
"I got him into the group of boys walking the Proteas out at Newlands. But don't tell him; let it be a surprise!"

As an avid cricket supporter, and a wanna-be-great mom, I was so excited for him. I could't disguise the wide smile that broke out on my face. And then I laughed. It was one of those deep, long laughs where I imagined God saying, "look what I have done", and me answering in reply, "of course You did!".

Yesterday was the big day, and when Papu collected Zac from school, and finally told him about the plan, Zac confidently told him he already knew. When the moment arrived, he proudly walked onto the field (I was watching from my classroom on my laptop). When I saw the first glimpse of him, my heart leapt, and then I must admit: I was bummed. He had landed up standing with the umpire. I asked him about this when he got home after the game:
"Zac, were you a little disappointed to be standing with the umpire?" I asked gently.
"Mom, I was literally standing next to Quinton de Kock the whole time," he said bouncing excitedly as he talked. "Why would you think that I would be upset?!"

Yes, I would do well to be more like Zac sometimes... 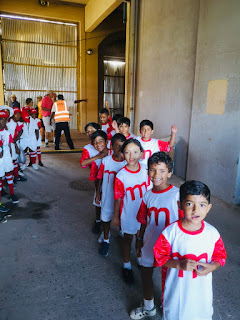 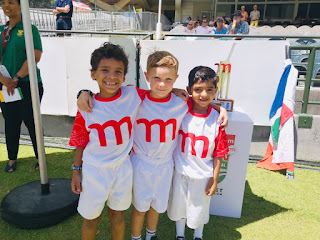 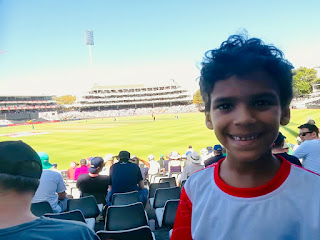 "Back to school, back to reality.."

I used to hate that song when I was a kid. It was part of a media ad that started playing almost immediately after Christmas, and signalled to me the start of another academic year. It basically called off the holidays even before it had officially ended. Fast forward 20+ years, and that same jingle elicits very different emotions. Now it's a reminder that the end is near, that I have survived the holidays with my children, and that very soon we can get back into a routine of some kind of normal.

This Christmas break was something. My first holiday with three kids was back in 2017. Bayley was a baby, and I was on maternity leave. Knowing that I did not have to return to work when the kids returned to school was probably my saving grace there. Then last year, we were away in the UK. Being surrounded by family and friends - and having Andel on leave with us - meant that I was actually never alone, and so we really did manage to have a holiday, despite being together all the time. This year, Andel worked most of the time, and I had a seven year old, four year old, and very active two year old, so my work was cut out for me.

Honestly, I could not deny the genuine relief when I began the school run last week - and on three different start dates, no less! I didn't even mind having to go to work myself. But by the afternoons, I really missed them. I missed the noise and the chaos, and all the things we take for granted but remind us of how blessed we are to have children in the first place. And when I collected them, I didn't have nearly as much sass from Zac, Bayley shrieked with delight at us all being reunited. and Sam excitedly rattled off all the new facts he'd learnt.

I take my hat off to parents. It's a tough gig. Whether you stay-at-home or work away, the demands for your time and attention (and sanity) are real and exhausting. But here's the truth: this is the most important, most amazing hard work you will ever have to do in your life. In spite of everything, let's let go of the guilt, and let's hold onto the moments we have right now by being genuinely present in them. All too soon this time will be over, and we'll be wishing we'd had more of it.

Robyn Hendricks Klaasen
Hello and welcome to our little space on the world wide web. This is our family's keepsake of memories, stories and things to think about as we make the best of every day we get to spend together.